I guess there is a first for everything, so...
cmowla Invasion (0 Losses).zip The replay is BROKEN after wave 15, but I luckily decided to record my play for the remaining waves, compiled all recordings into a video, edited out the times when I was reloading saves (which is NOT as many as you would think...me beating TSK 20 in 4 minutes and 28 seconds took many many more reloads and much more knowledge about the game mechanics), and therefore I effectively made a working replay for anyone who is interested to see. (Click the link below to see the "replay"/video.)


Knights and Merchants KaM Remake - Invasion (0 LOSSES)
A few comments: Have a nice day.
You do not have the required permissions to view the files attached to this post.
Invasion won: with 0 losses and without save reloads|TSK 20 in 4.47 minutes|Northern Islands I Co-op in 1.71 hours|||NEW! The Official KaM Speedrun Page
What makes me an Expert isn't my skill in of itself but my desire to win big.
>>
<<

Still trying to to beat the hell out of the AI?

Good job you've done there! I wouldn't be able to play even one mission like this and not lose my nerves. Keep it up cmowla! Your playstyle is always interesting to watch, because you can discover all the hidden features of the game.

Have a nice day,
Vatrix
I fixed The Shattered Kingdom and The Peasants Rebellion here!
>>
<<

Location: In the Market

Hi,
I really wish to see this performance in the multiplayer games also.
(It will be a bit selfish, but I proud for this fighting skill for myself also, because mine is equal or below zero.)

Thanks for the compliments, guys.

The motivation for me to do this was actually me doing a favor for YouTube user, Khanh Doan, of whom I recently had a conversation with about Invasion on KaMRemakefan's video Zombie Apocalypse v1.1's comments page.

(For those who are new here, the replay that was recorded in KaMRemakefan's video was for r5503 and can be downloaded here. While you're at it, you can download and watch me beat the original 60 wave non-autofeed version--you have to feed your troops in that version--from this post.)

He used my general approach to beat Invasion, and he took it to the next step and tried to lose as few men as possible. Below are the screen-shots he provided (he used saves) of his setup and stats in r6720. He requested that I attempt this, as he was curious to see how it could be done--if it could be done (which includes not killing your own units with your own range units, an issue he mentioned that he was having). However, meeting his challenge wasn't too cumbersome, as I actually created this 0 loss alternate setup back in 2013 just two weeks after I created the replay KaMRemakefan recorded for that video! I can see that no one ever downloaded it, but it is a full-working replay (in r5503) of the main approach that I took for this 0 loss win. The only difference here is that I played it in r6720, reloaded saves, and played at a slower game speed. (Obviously, things went sour in that replay around wave 52, but I never attempted that approach again...until now.)

I particularly liked how I made use of Skypper's rectangular plateau! Invasion won: with 0 losses and without save reloads|TSK 20 in 4.47 minutes|Northern Islands I Co-op in 1.71 hours|||NEW! The Official KaM Speedrun Page
What makes me an Expert isn't my skill in of itself but my desire to win big.
>>
<<

KaM Remake folder -> open KaM_Remake_Settings.ini (make a backup copy first) -> change SpeedPace=100 to SpeedPace=200 for .50x or SpeedPace=400 for .25x -> save
Change SpeedMedium=3 to SpeedMedium=2 or SpeedMedium=4 to be able to use F6 for (almost) normal game speed

Please note that this might affect multiplayer as well (not sure)
Just when you think you know something, you have to look at it in another way, even though it may seem silly or wrong. You must try! - John Keating, "Dead Poets Society"
>>
<<

I don't know why I didn't think to mention this before, but obviously I halted my bowmen and crossbowmen in the top of the map quite a bit.

Near the end of my TSK 08 Initial Battle Video (played in r5503), I halt my bowmen quite a bit to cause the barbarians to die "prematurely".

So the halting command is somewhat like a "hack", if you think of it this way.

So besides the setups that I show in the video of this 0 loss win with Invasion (as well as replacing tired troops with fresh ones and reloading saves), halting my range units was another important contributor.

And it wasn't by accident that I had a few crossbowmen in those range unit groups in the top of the map. I experimented a little to find that that halting those groups of bowmen with those specified number of crossbowmen made the halting more "potent". But I didn't want to add TOO MANY crossbowmen, because then my troops would get killed from my own arrows much easier.

This was my army composition that I beat Invasion with 0 losses: 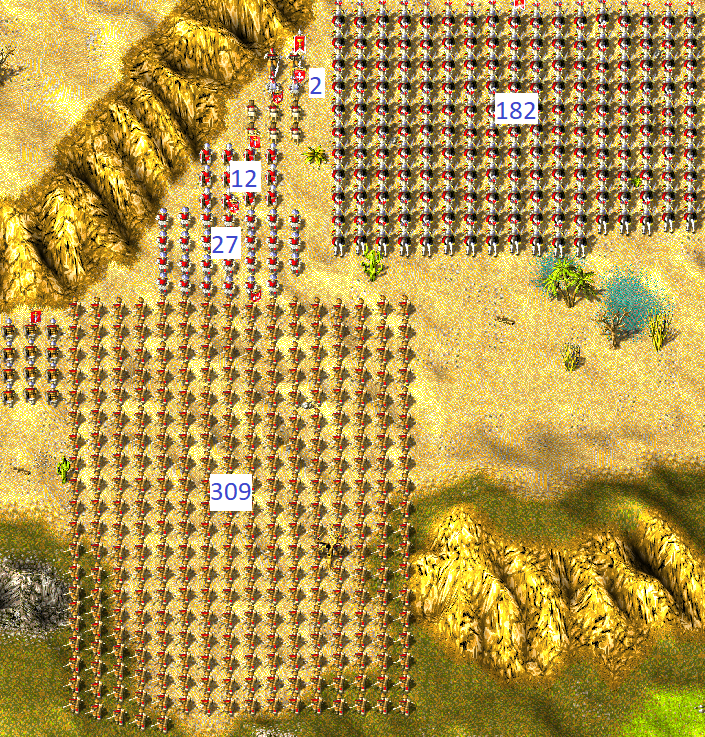 Invasion won: with 0 losses and without save reloads|TSK 20 in 4.47 minutes|Northern Islands I Co-op in 1.71 hours|||NEW! The Official KaM Speedrun Page
What makes me an Expert isn't my skill in of itself but my desire to win big.
Post a reply
9 posts 9 posts • Page 1 of 1

Users browsing this forum: No registered users and 1 guest